Who says GTTs aren’t as well loved as its bigger brother? 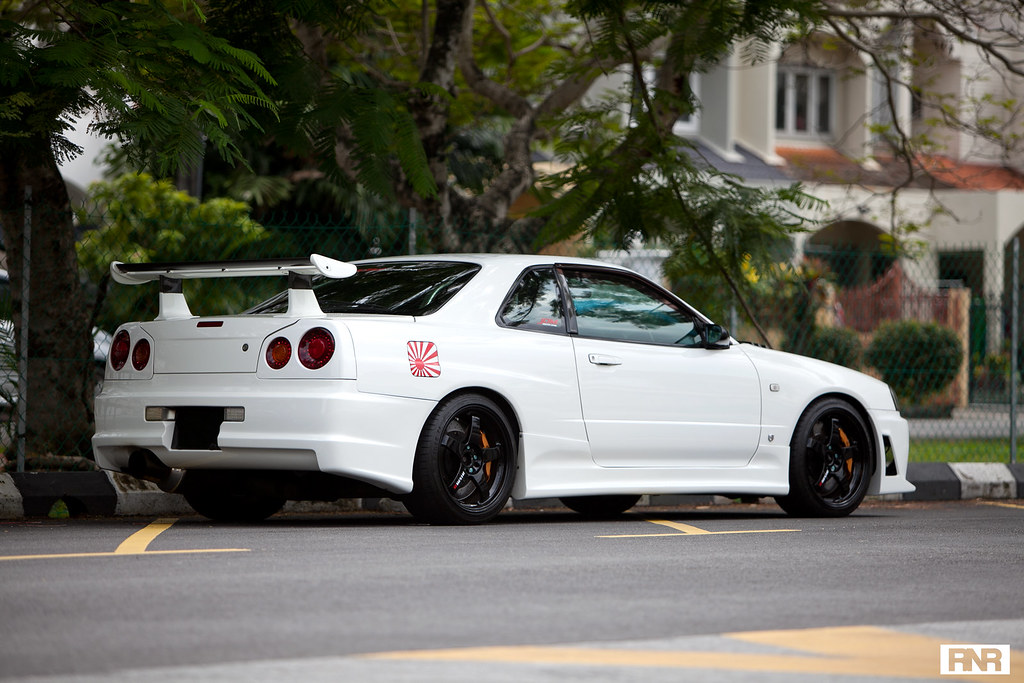 The Skyline R34 has became a cult legend so much so everyone including non-car enthusiasts acknowledges the car. People of all ages, whether a 60 year old uncle or a 12 year old boy recognises the Skyline name. Nicknamed 'the Godzilla', the Skyline was a car ahead of its time. 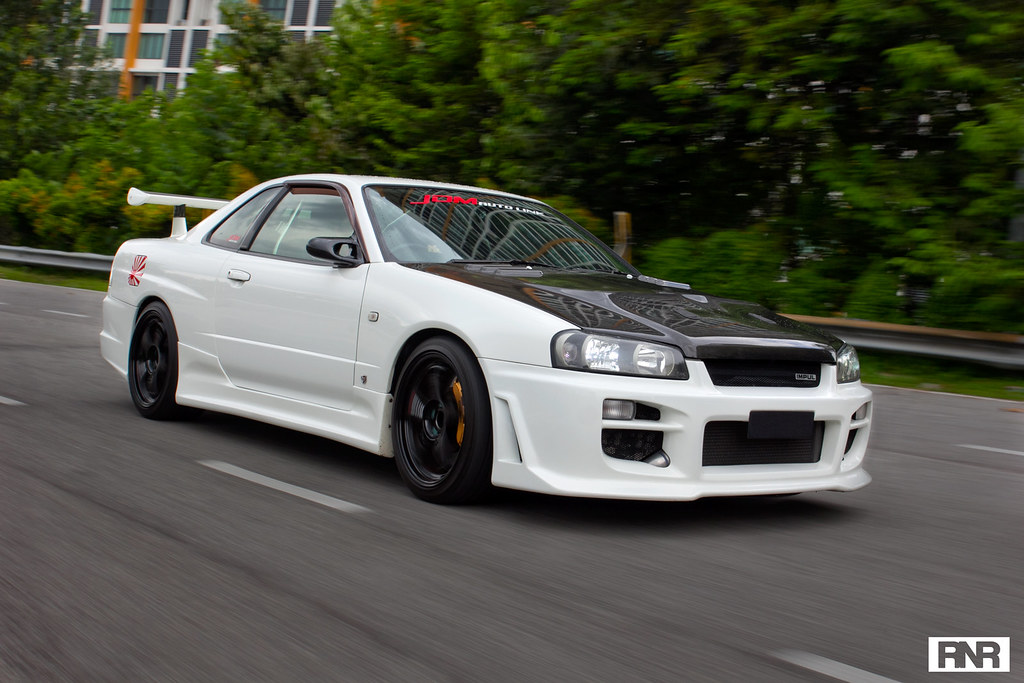 During the good old days of the PlayStation 1, the Mitsubishi Evo VI was a highly sought after car because of its extreme handling and practical looks. It was only after a year or two I was introduced to the R34 GTR and instantly fell in love the way it drove and its orgasmic RB noise. But with all the hype around the top of the line AWD RB26DETT Skyline R34, was there any love for the 2WD versions namely the GTT/GT? 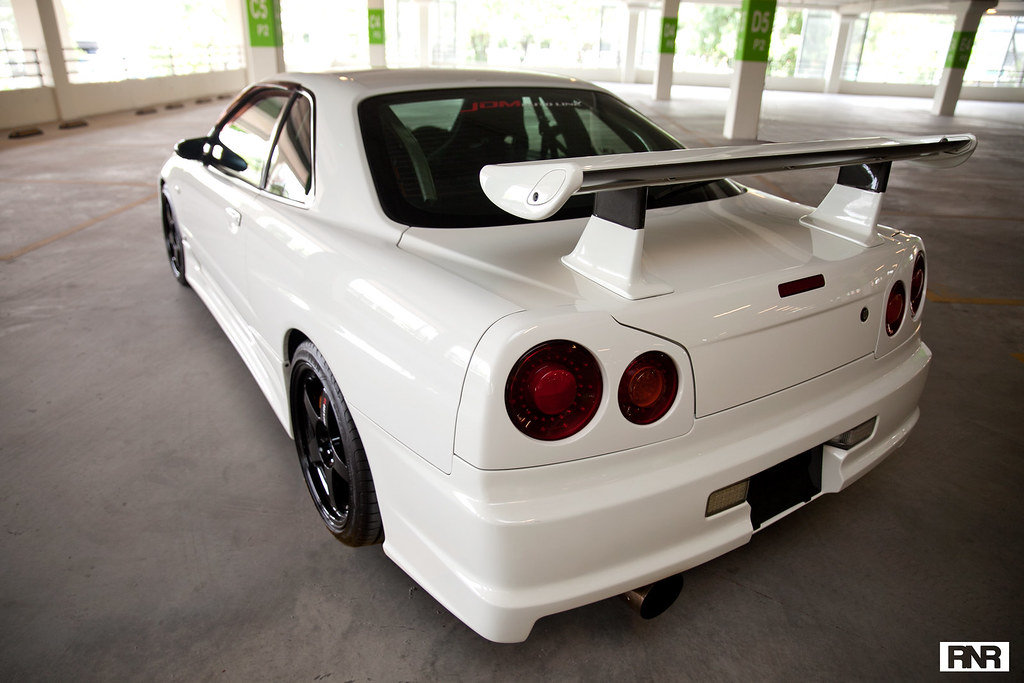 Without looking at the specifications, would you be able to tell that this is a GTT? It looks as sexy as the GTR and it goes as fast as the GTR. Eu Jin, the man behind the popular Skyline parts company JDM Auto Link, chose this GTT as he didn’t want the ‘older’ R33 GTR. He went through a myriad of dealers as he wanted the car to come with as many optional OEM accessories as possible. That means the Nismo bodykit, sunroof, navigation screen and privacy glass were all stock. 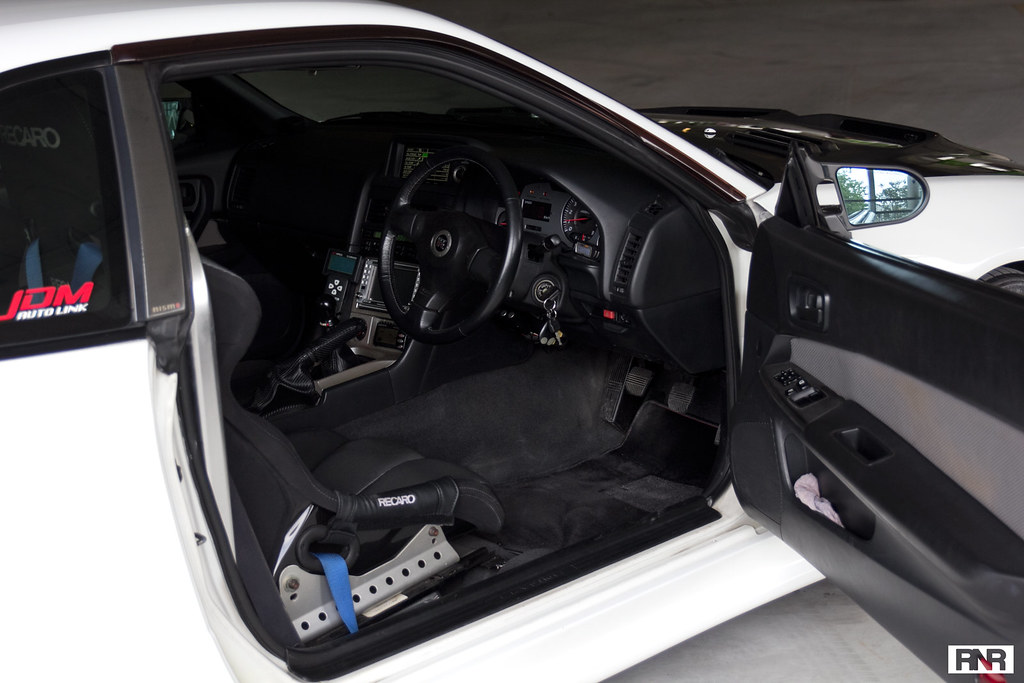 However, it wasn’t an easy choice when he narrowed down to the 3 possible car candidates that would soon to be his new baby. He had eyes for a 3rd gen MR2 as well as the very popular Silvia S15. To resolve the dilemma of choice, he got behind the wheels of each car to decide which made his soul tingle. When he drove the GTT, he was instantly hooked to the torque of the smooth RB25DET Neo. The next thing he knew he was sitting in the office, signing the purchase papers.

A better love story than Twilight? Most definitely.

However it wasn't a joyous fairytale love story. The car needed and still needs plenty of pampering, love, patience, ie-the coins. The new Tein Super Street coilovers complained after just a couple of months in the car, good thing it was an original set bought via Malaysias distributor! It was later swapped for a Trust Greddy Damper Type S suspension kit. The boost pressure sensor hose has cracked more times than Eu Jin can remember. The alternator decided to join the party and had to be replaced, it was later joined by the headlights which decided to be an aquarium for a day. The brake discs didn't work too well even with fresh skimming, so he swapped the original rotors for a whole new set of Project Mu rotors. But that wasn't the end of the brake sub-plot, a massive set of Brembos from the R35 GTR was shoehorned (front and back) into the car to provide the stopping power! For JDM cars, stock parts are pretty hard to come by and takes a long time to ship into Malaysia, with the constant issues springing up one after another, the 'love story' was turning into quite a challenge for Eu Jin.

However like in all good romance stories, the hero usually persists and eventually wins the heart of the girl.

Perhaps it's because Eu Jin has been fully utlizing the 352whp all the time, the issues didn't stop. But that didn't stop him to from installing a Greddy speed cut limiter! Persistance! Eu Jin is an avid touge enthusiast, frequently visiting the various green mountain roads of Malaysia. 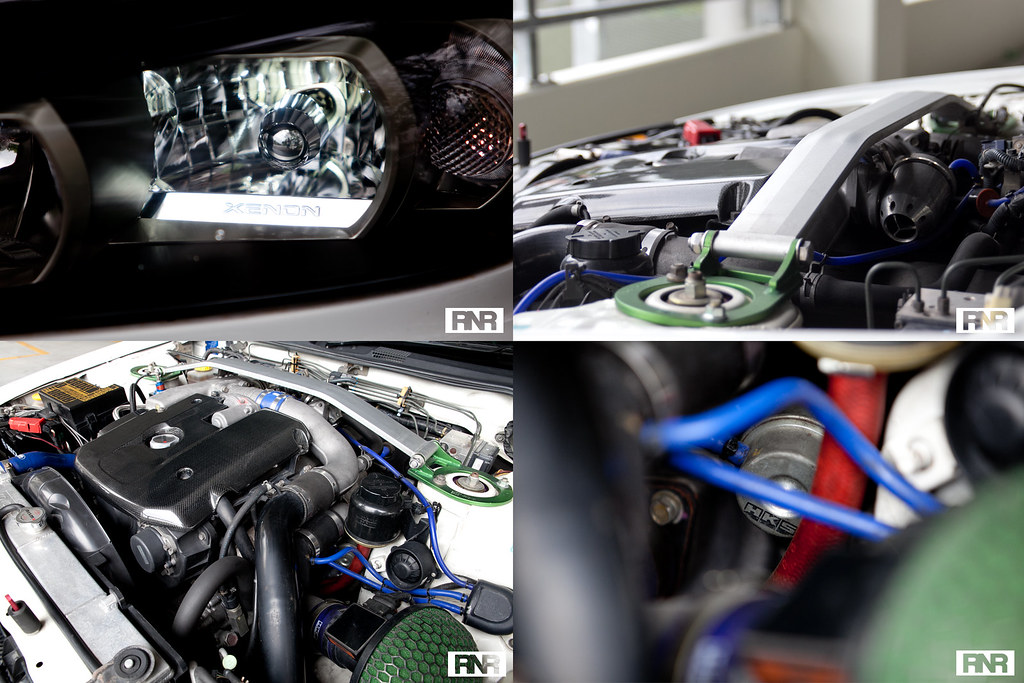 The RB engine internally is mostly stock. The infamous fragile ceramic little turbines were replaced with a HKS GT-RS, for reliability and unleashing some additional ponies. Everything is controlled by a Apexi Power FC. The engine bay is finished with a one-off custom JDM Autolink CF engine cover. 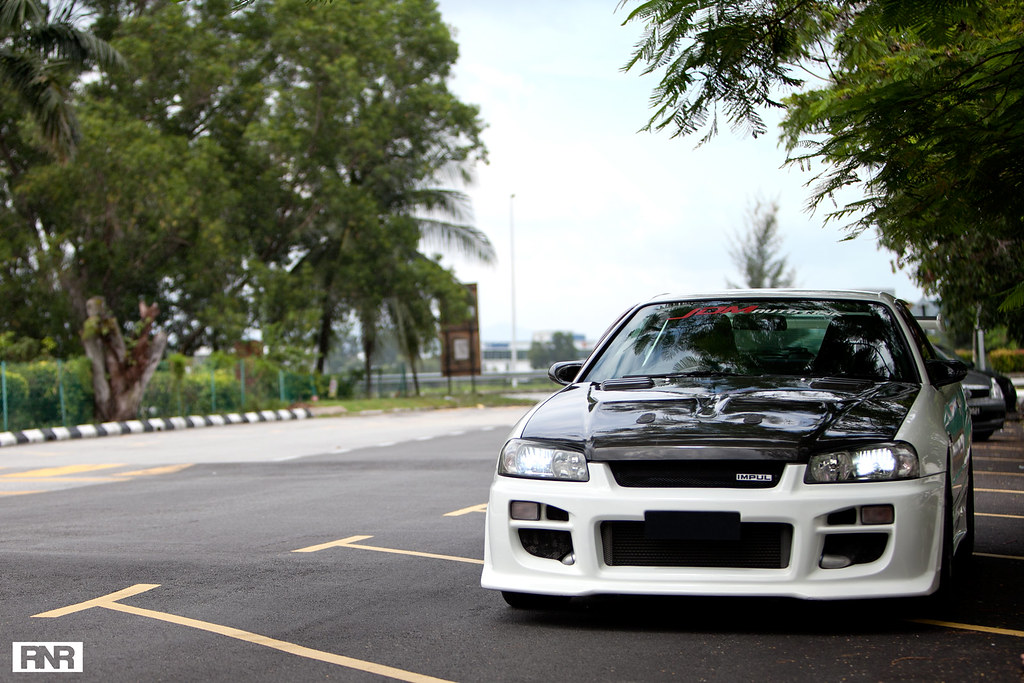 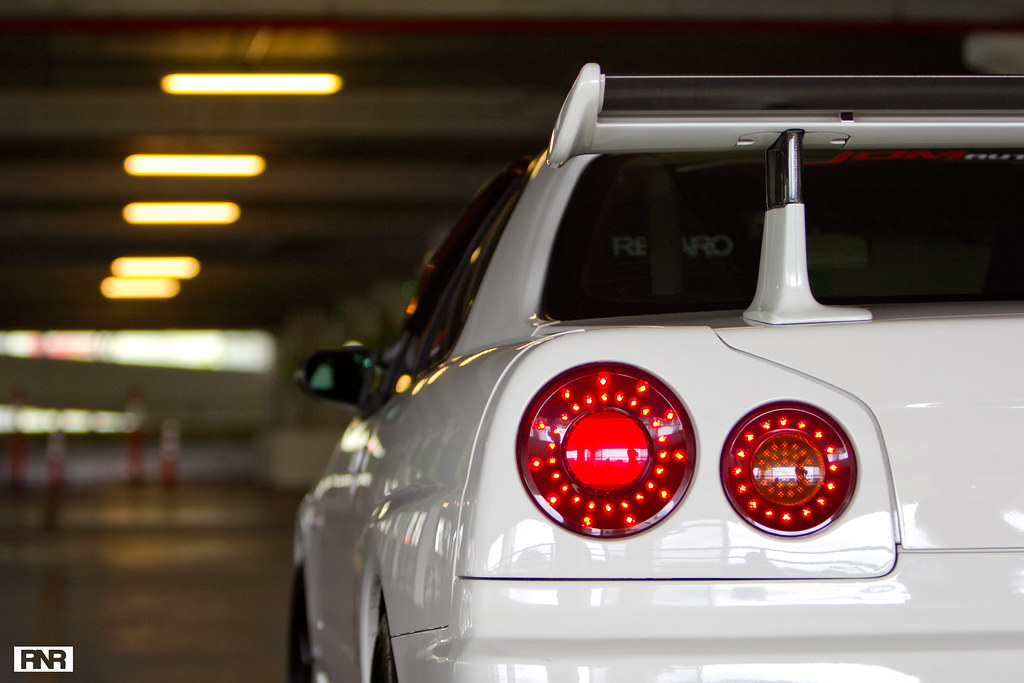 The unique LED taillights were custom made all the way from Japan.

After a year of driving with the original bumper, Eu Jin finally got himself a Impul 534s bodykit to differentiate himself from all the R34s out there on the road. The rear R34 GTR wing was raised 10cm for practicality purposes, rear view mirror visibility is poor when you have a massive wing smack right in the middle of the rear windscreen! To further improve the looks, a Works Emotion XD9 rim was installed but it has since been replaced with the much more handsome and muscular Nismo LM GT4s. These rims are a perfect match for GT cars such as the 350z and the R34! The body has since gone through a few paint corrections to maintain the super clean white look. 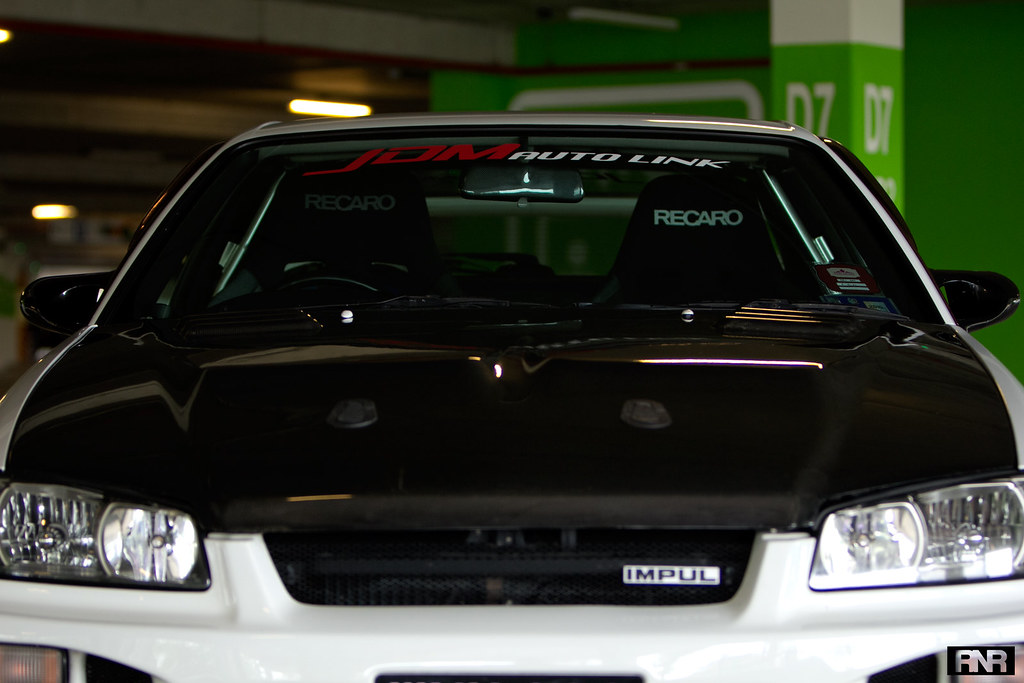 The interior has had as much pampering as the exterior. A pair of Recaros are there to hold on to the buttocks, Do-Luck bars for the added stiffness, R34 GTR Multi Function Display with a Nismo motherboard, a R34 V-Spec II Nur steering wheel, and a classic extremely rare Tommy Kaira 25R meter cluster! 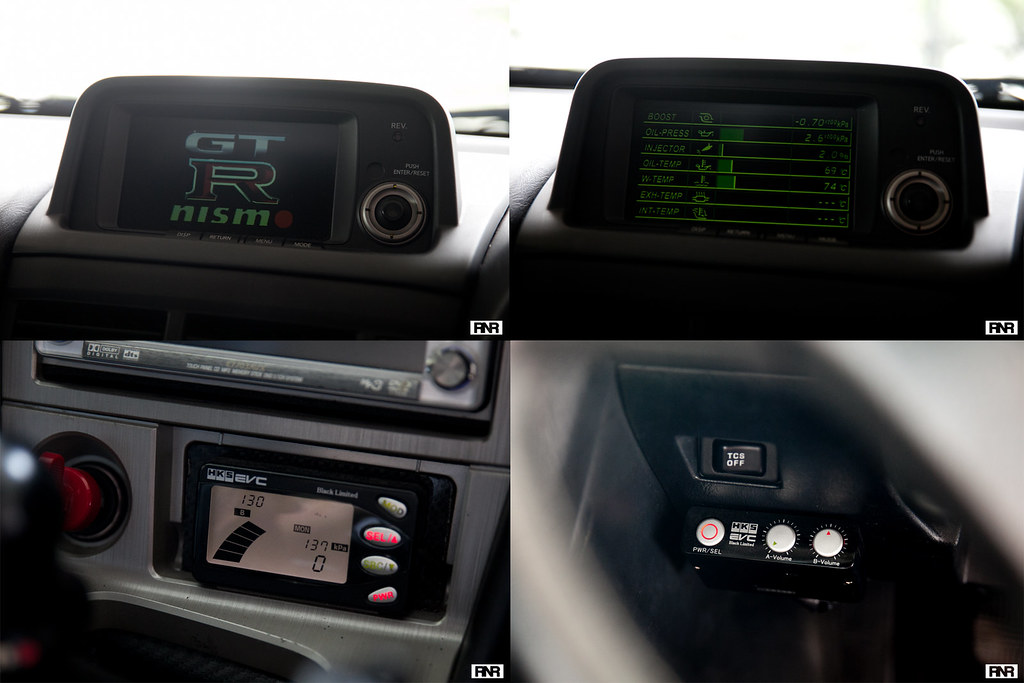 Eu Jin has been enjoying this car since 2006, may his love story with the GTT grow with each day!