with his Evo X 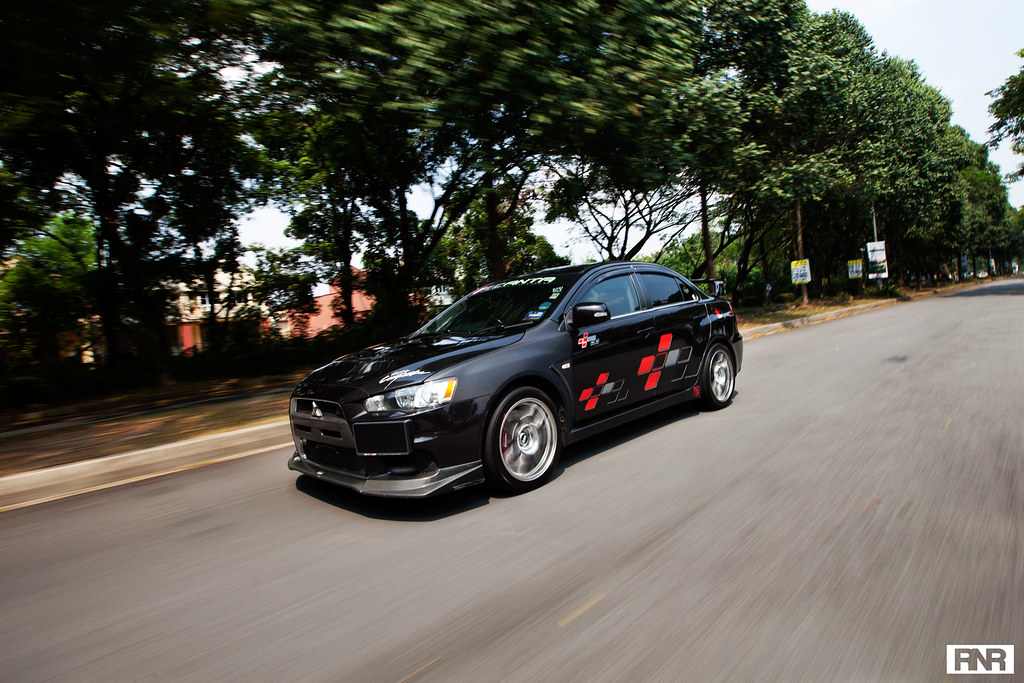 Let me bring you back to the time when you just bought your first car. Probably a 4-potter that barely makes 90bhp on crank, those glouriously puny front brakes and 1970's rear drums. Unless you had daddy-dearest (who happens to own a fortune-500 company) buy you a car, all our cars were turds. OUR fantastic little turds on wheels. 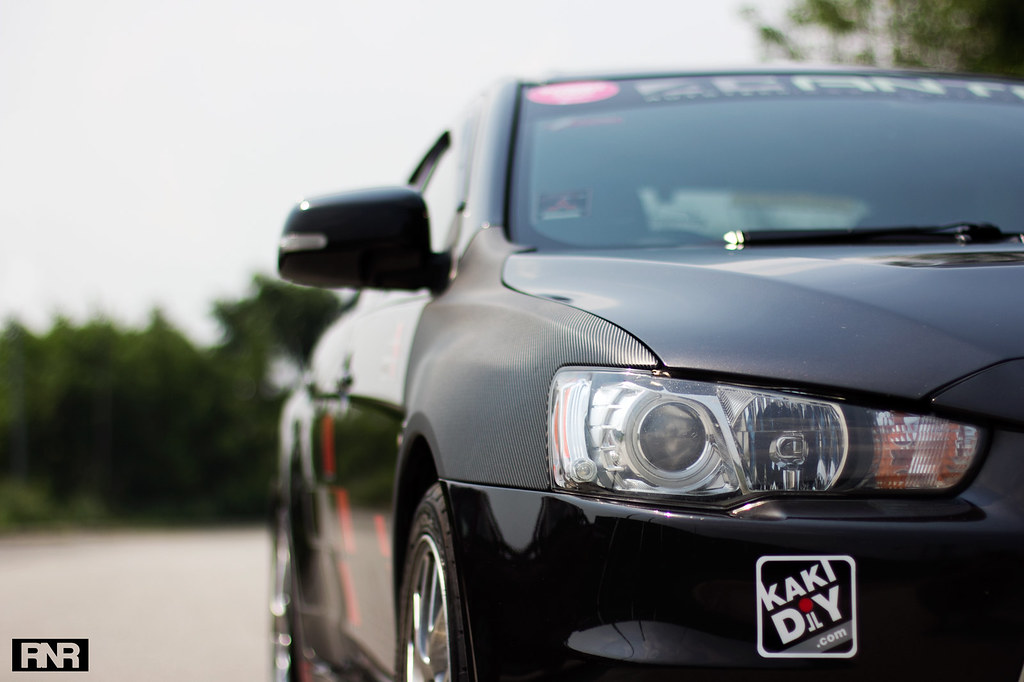 Like every normal petrol head we always think about the little things, like how to make the turd-mobile more comfortable, more aesthetically pleasing, more powerful, corner faster - All on the cheap! It's bad enough half of our salary goes to paying the car loan and petrol. Can't be sacrificing our paltry food budget for all those mods right? We gotta eat, then only mod. In that specific order. 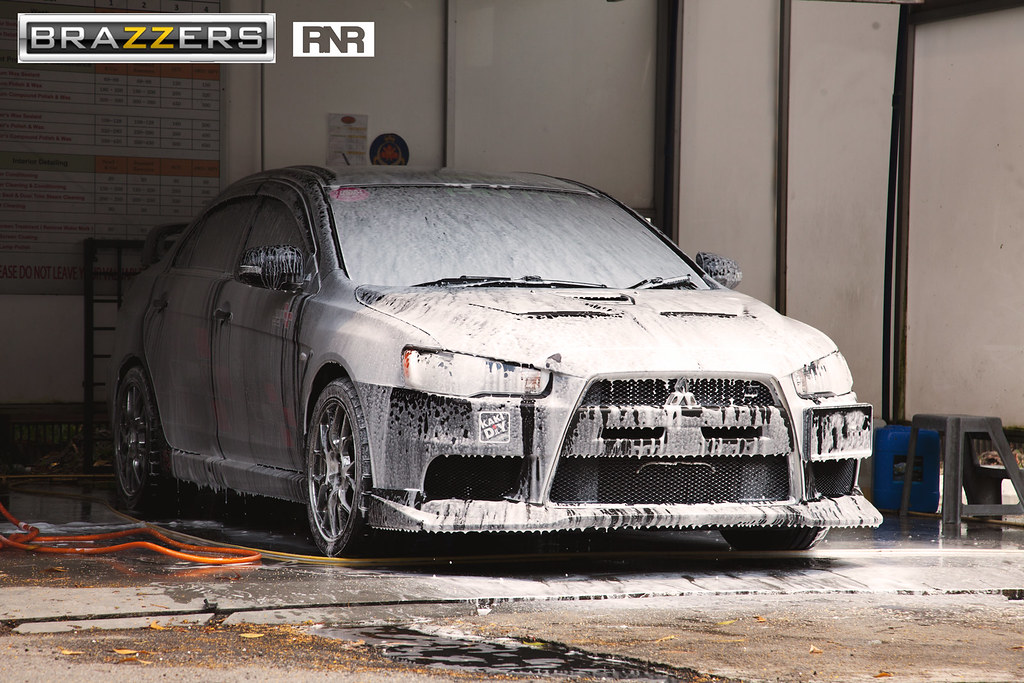 Meet Johnson, one of the original pioneers in the world of DIY. His humble beginnings started with his back-then daily drive, an ancient Nissan Sunny 130Y. DIYs quenched Johnsons thirst for car modification without breaking the bank and one of the most famous DIYs that he thought up was the cable-tie-brake-hose mod. Instead of replacing worn brake hoses with steel lines, he cable tied the brake hoses (imagine extreme bondage, but with a brake hose) to prevent expansion on the hose itself effectively improving brake pedal response. This DIY garnered a lot of ridicule from the car scene back then but no one was laughing when people realised that it worked and that it only costed less than a small bag of cable ties to do.

Fast forward a decade and you probably have already guessed that he no longer drives an old Nissan Sunny. But even the technological marvel of a car hasn't stopped Johnson from tinkering with the car. Queue dramatic Evo X entry music! 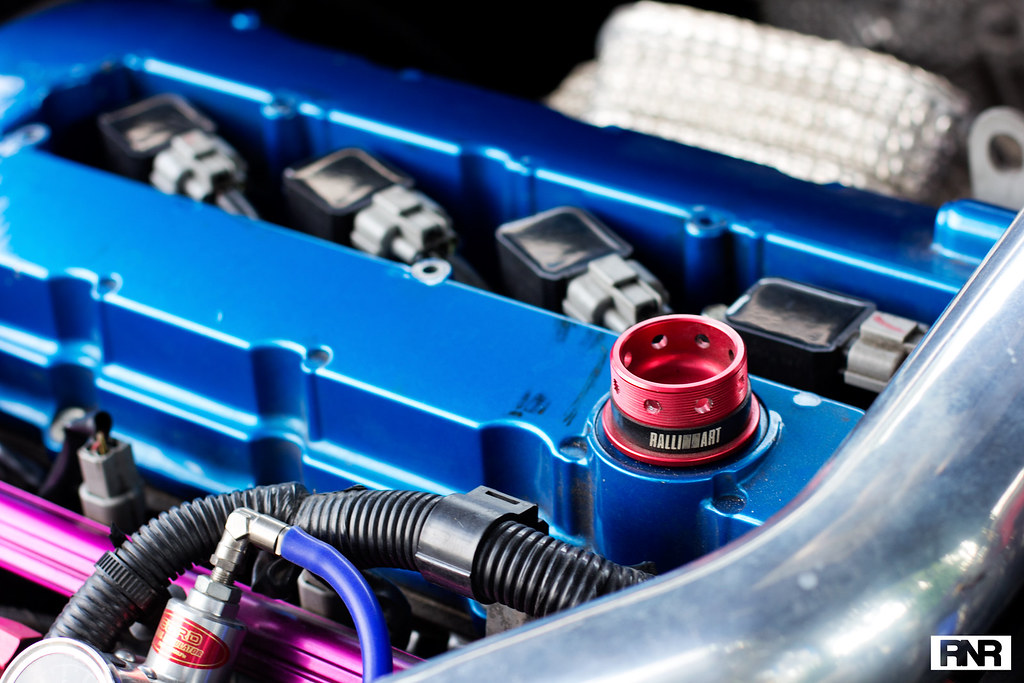 The last of the legendary Evo line : The JDM Mitsubishi Evo X GSR, runs a buttery smooth 6 speed twin clutch transmission. Johnson explains with this clutch system, the turbo doesn't need to spool again at every gear shift like the traditional manual. This is evident as this Evo X doesn't have any blow off noise. With no suspension squat at every gear change, this makes the car feel so incredibly fast off the line. And for the uninformed, the clutch makes a strange "kruk kruk" noise similar to the Ogura ringing sound. Instead of a "kring", you get a "kruk". Not that this actually matters but it's better to be informed than to assume that there's a problem with the car. 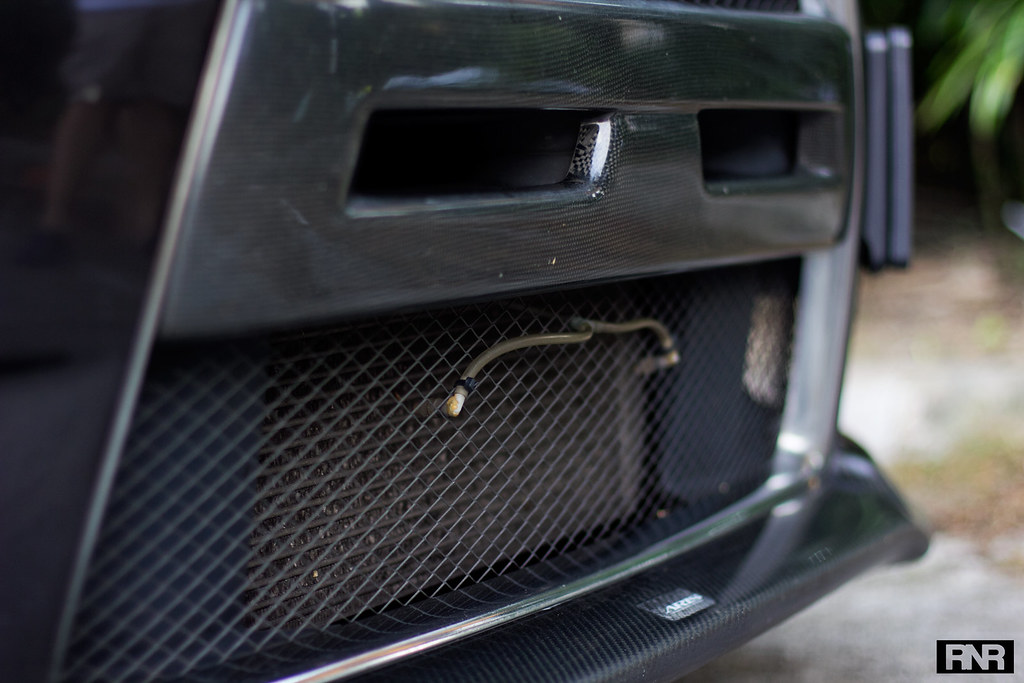 One of the more popular DIY modifications everyone can appreciate is the DIY intercooler spray. It can be used for the radiator or anything that can use water to cool off. The JDM version doesn't have this equipped as standard but I'm told that some other variations do. Via OBD ETACS (Mitsubishi's electronic control system), Johnson disabled the wiper if the DIY sprayer is toggled since he taps the DIY sprayer water from the wiper fluid tank (which he only fills with water). On the road, this mod will give you a minimum 2°C drop in temperature!

Want a more cooling aircon? Grab some foam insulation tubes meant for home air conditioning systems and insulate your car aircon hose (if they don't come insulated as standard). This ensures the condenser works less as the gas in the tube stays cool instead of soaking heat from the engine bay. Less power consumed by the the aircon condensor and a colder air cond! 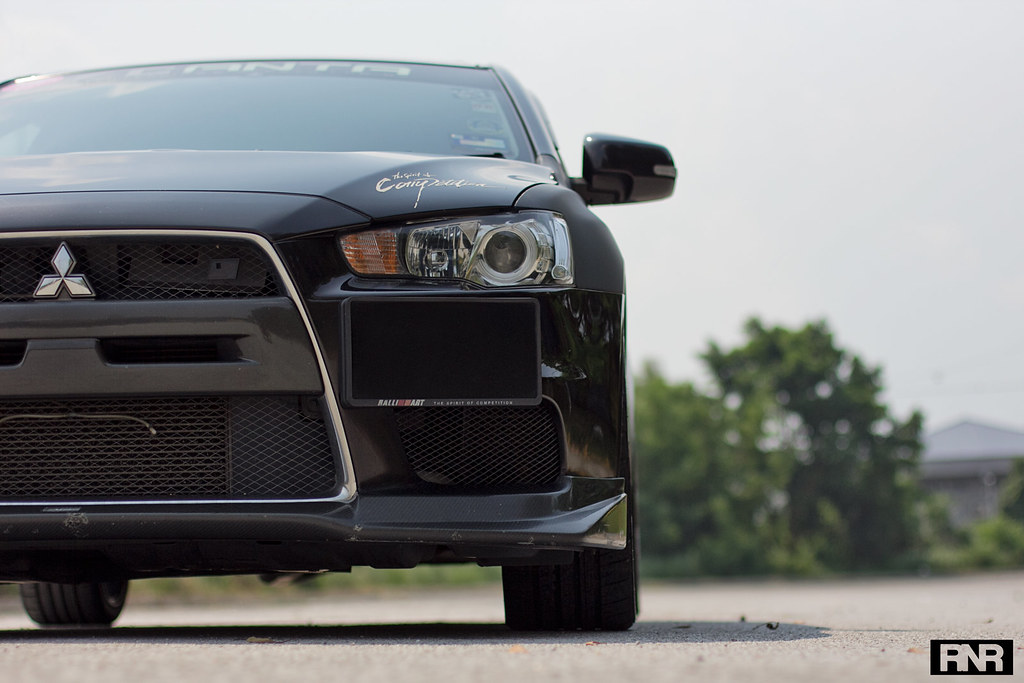 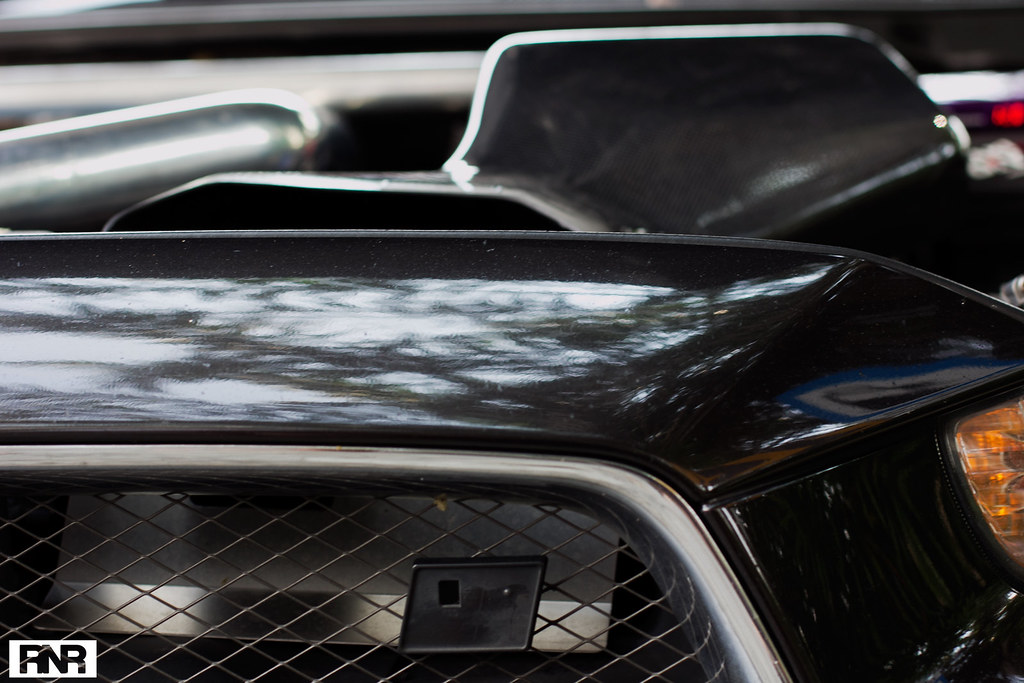 A while ago, Johnson blew the stock turbo from an overly aggressive DIY tune. Now he's rocking the TD05H turb with must-have shiny aluminium intercooler pipings. But before he swapped out the pipes, he applied the theory of the cable-tie-expanding-brake-line mod to the OEM rubber pipings to prevent it from expanding which reduces the time the turbo has to spool to build up enough pressure. If you don't have the budget for steel/aluminum pipes but still want to try to reduce the spooling time, do try it out - it works! Johnson has also DIY tucked away the wiring around the engine. Check out the smooth cold air intake which channels air to the M7 carbon fibre snorkel. 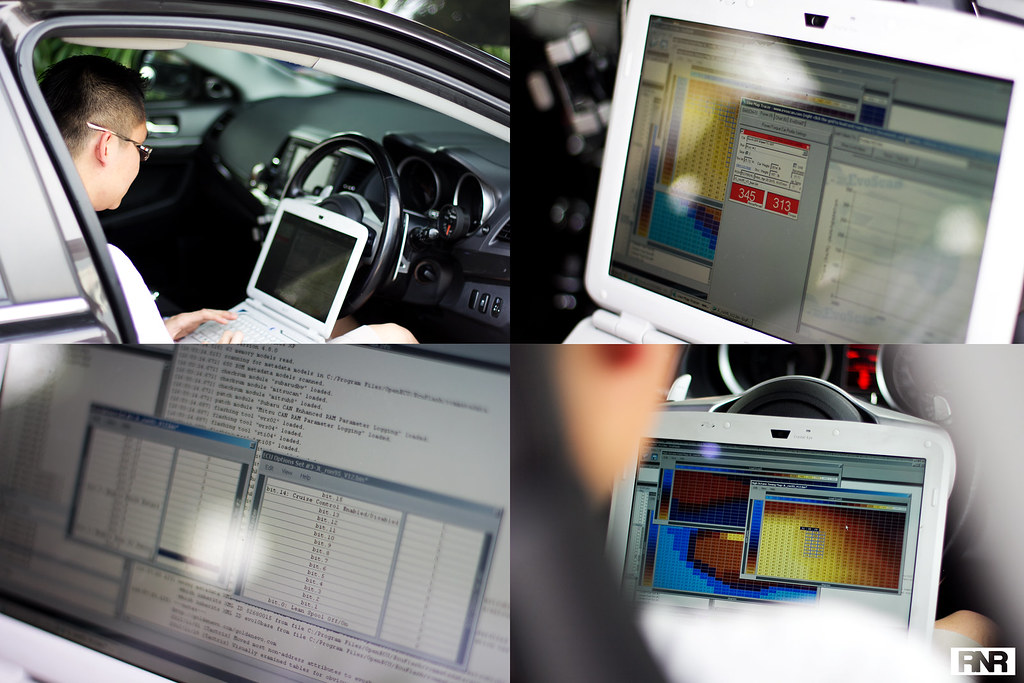 Via DIY tuning, he was able to program both RON95 and RON97 maps which can be easily switched. With the current hike in fuel prices (despite lower crude oil prices?) a map to run the lower priced fuel is prudent. Johnson has tuned the Evo to boost at 1.6bar to a max 2.1bar, stock boost is 1.5 bar "only"! His wife drives a Lancer GT as a daily and yup, you've guessed it. He tinkers with that car as well, tune as well as mechanically. Johnson spends his spare time fine tuning Mitsubishis, not just for himself but for others too if you manage to catch the busy man on his free day. Johnson cannibalised an old Android TV motherboard and fused it with HDMI adapter to build an interface to hook up with the Evos 'central nervous system'. This bloke never fails to impress! 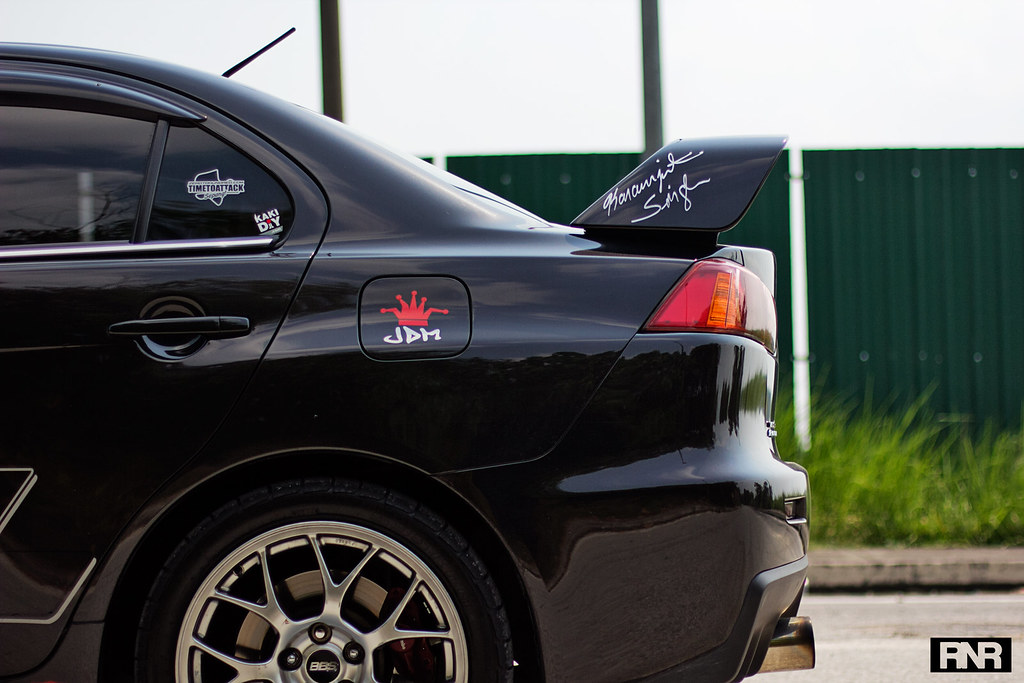 Usually when we see enthusiasts modifying their exhausts, we see branded parts being used, e.g.- Greddy, Akrapovic, N1, etc. Johnson opted for the local hero Jian Hang Exhaust with their own custom made twin output low resonance muffler. He also sports the Kakimotor downpipe, Ganador Racing Mid Pipe and HKS racing bullet to replace the catalytic converter (Malaysians can get away with almost anything). 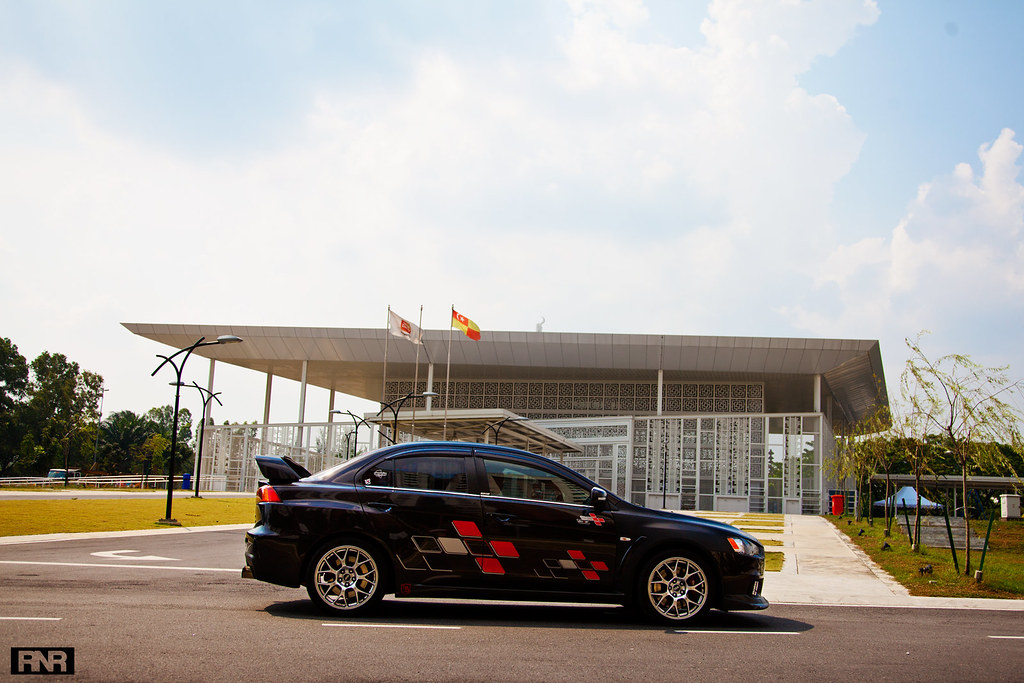 Johnson dailies the Evo X to work and as atypical as it sounds, we Malaysians appreciate comfort no matter how young and passionate you are. None of us like using bone breaking suspension on the potholed roads of Malaysia. Johnson used to run with Tein Monoflex with EDFC but the stock suspension can rival the Monoflex whilst offering comfort. So now the Monoflex is only for track day use. 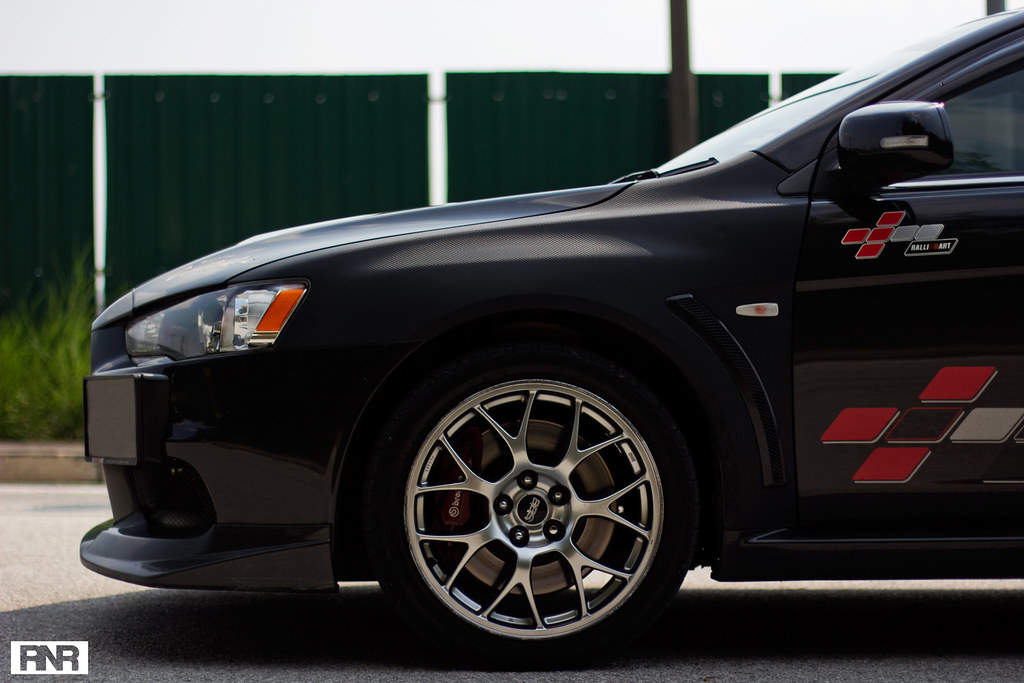 During our photoshoot, Johnson realized the Ralliart badge at the front grille was missing! Damn thieves! They attempted to take the Yaris sticker on the front lip but only managed to take the Y.

Noticed the 'carbon fibre' wrap on the fenders? Interesting fact for the day you probably didn't need to know : Johnsons fender came in contact with sewage water. Thinking it was just water, it was left there to fester for 3 days and the original paint couldn't take it. If you want to know more about the sewage story, you'd have to ask Johnson to tell it. It's revelling to say the least!

From the early stories Izso told me about Johnson and in the short time I've known him, I've concluded that he's a really dedicated person, down to earth and generous. He willingly teaches anyone willing to learn! So if you guys want to give DIY a try (not just cars, everything!) find him at KakiDiy.com.

Suspension and Brakes
Stock Suspension. Swapped with Tein Monoflex if sent for servicing