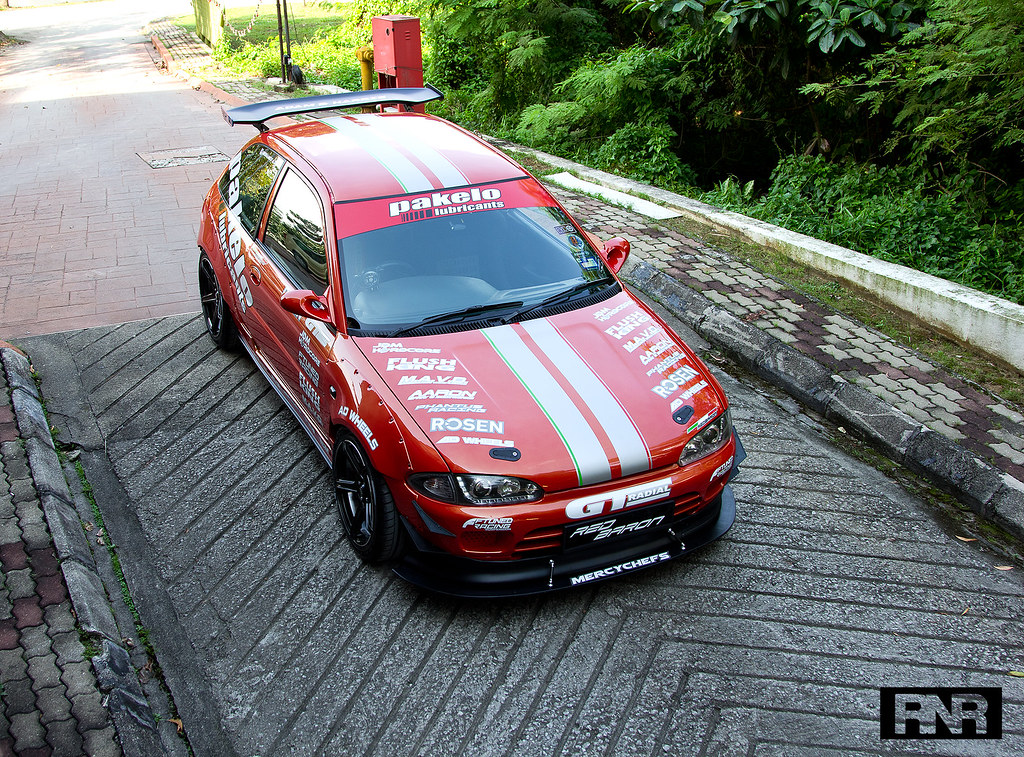 The term "Baron" originated from a Germanic word meaning "man, warrior". Today, the word usually refers to an industrialist who has dominance in a certain field. How apt Azman named his red pocket rocket the "Red Baron". Having heard stories of his dominance in 'Grass Roots Racing' or GRA, I had the impression he was untouchable and pretty much unapproachable, as is with all celebrities that've made it to the top. 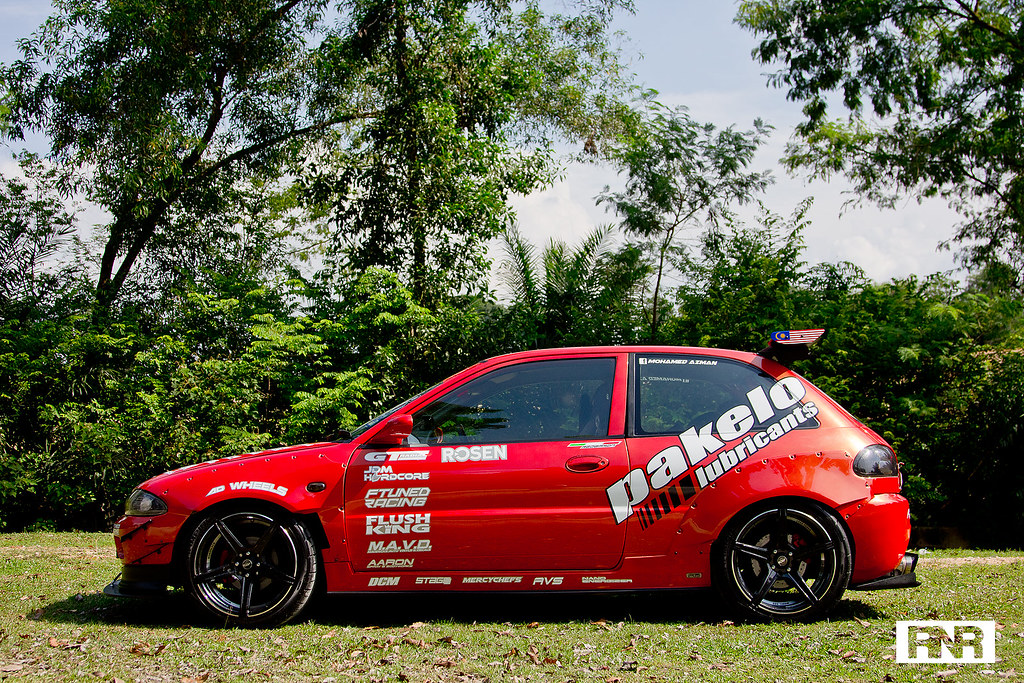 But that wasn't the case with Azman. First time ever meeting him was at a dyno-run in Sunway, he was having his car tested and I just happened to chance across the famous stickered car. I started a conversation with the smiley faced Baron who obliged every question I threw at him. 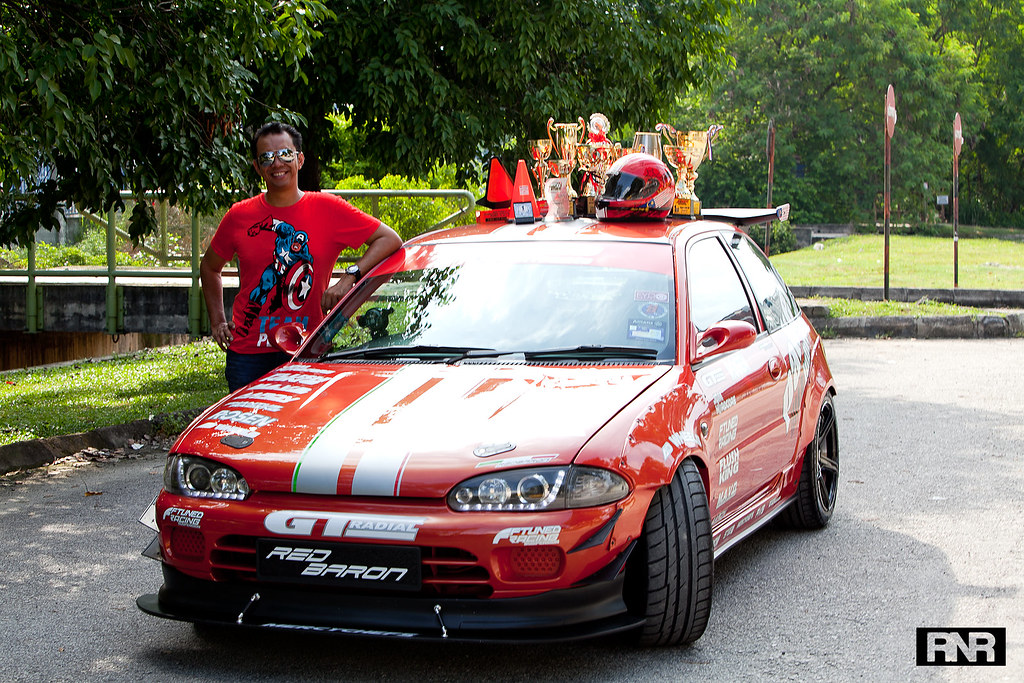 Azman explained that Red Baron v1 was a pure 1.3 through and through. He had some work done to the head (port & polish) but that was about it. Everything else was camber and alignment tweaked to suite his driving style, tyres - whatever was given to him by his sponsors, no roll cage and some chassis strengthening bars presumably provided by his sponsors. Pure skill is what got him where he is now! 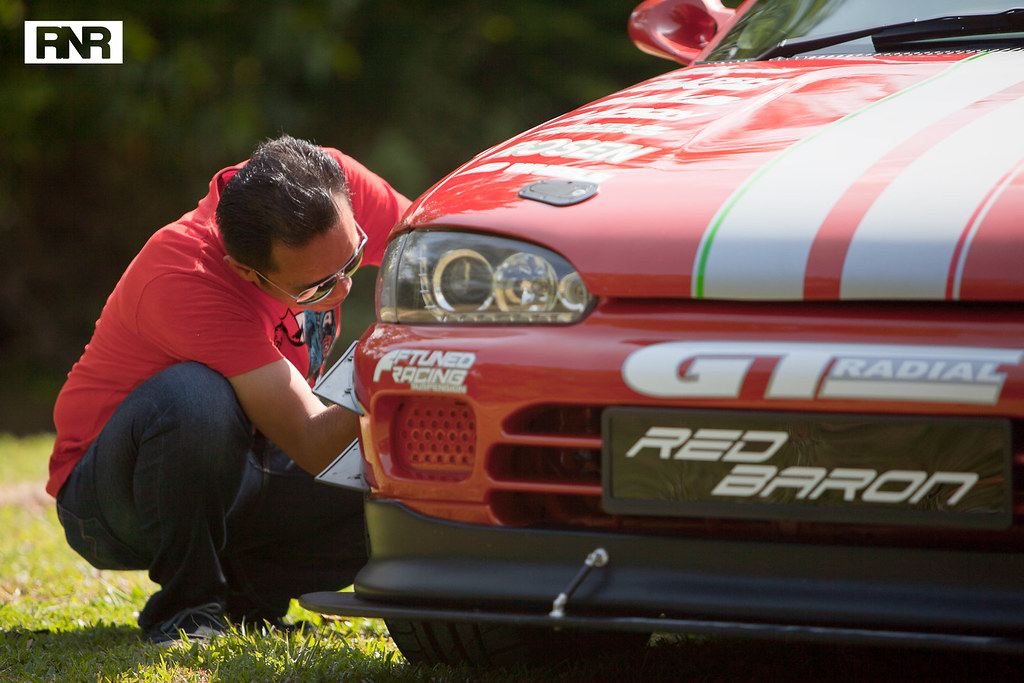 Sometime in 2011 Azman started his motorsports ambitions at a then-less-frequent 'grass-roots' event called Cyberkhana. It was either make or break for Azman since he had decided to either go full throttle with motorsports or to venture more into his white-collar desk-pushing job. There were only 3 categories at the time, 4WD, FWD and RWD. He was in the middle of the pack of the FWD category but the times were so close that he had made up his mind. The rest is history! 1.3L history to be exact!

Azman fondly recalls the GRA upstarts he calls friends today - Mitch Chong, Hugo Maverick, Arif, Mickey, Jim, Leona Chin and Mike Ng. Friends that he can share a drink with (non alcoholic of course), but enemies on the track. He explains that GRA is a good place to start your motorsports career. The GRA community are very closely knit, sharing tips amongst each other, helping out competitors whenever they were in trouble, shared mechanic tools, basically everything you'd never see in Sepang happened in GRA. Everyone helped out everybody regardless of competition. 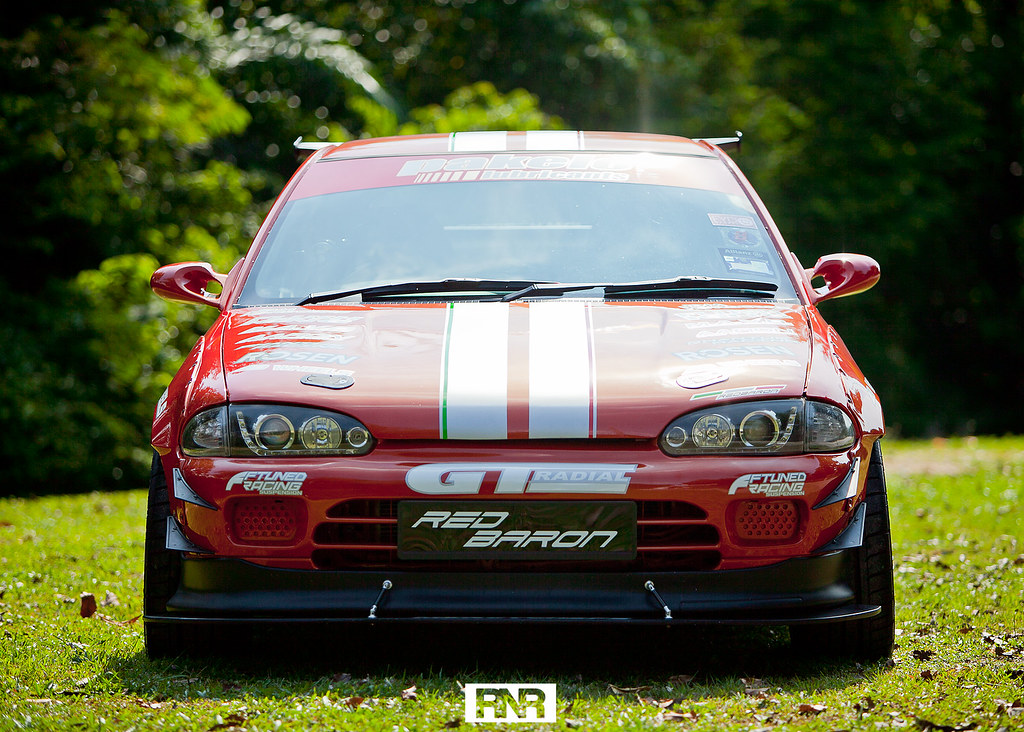 Interestingly, Mitch Chong was the one who setup the suspension Azman's 1.3L Proton Satria. Meaning the student actually managed to beat the master! In 2012, he had won enough GRA events that he decided to quit GRA not because he was bored, but because he didn't want to turn off others from competing.

"Quit while you're ahead!"

He was the man to beat! Azman nonchalently mentioned that if he entered and event, it would usually result in a podium win. Arrogance without the arrogance. He didn't want to kill the sport hence the decision to join time attack sessions, and at the same time he wanted to promote the sport to new folks. And true enough, the moment he left the number of new participants soared up since there apparently was a higher chance to win since the Giant had quit! 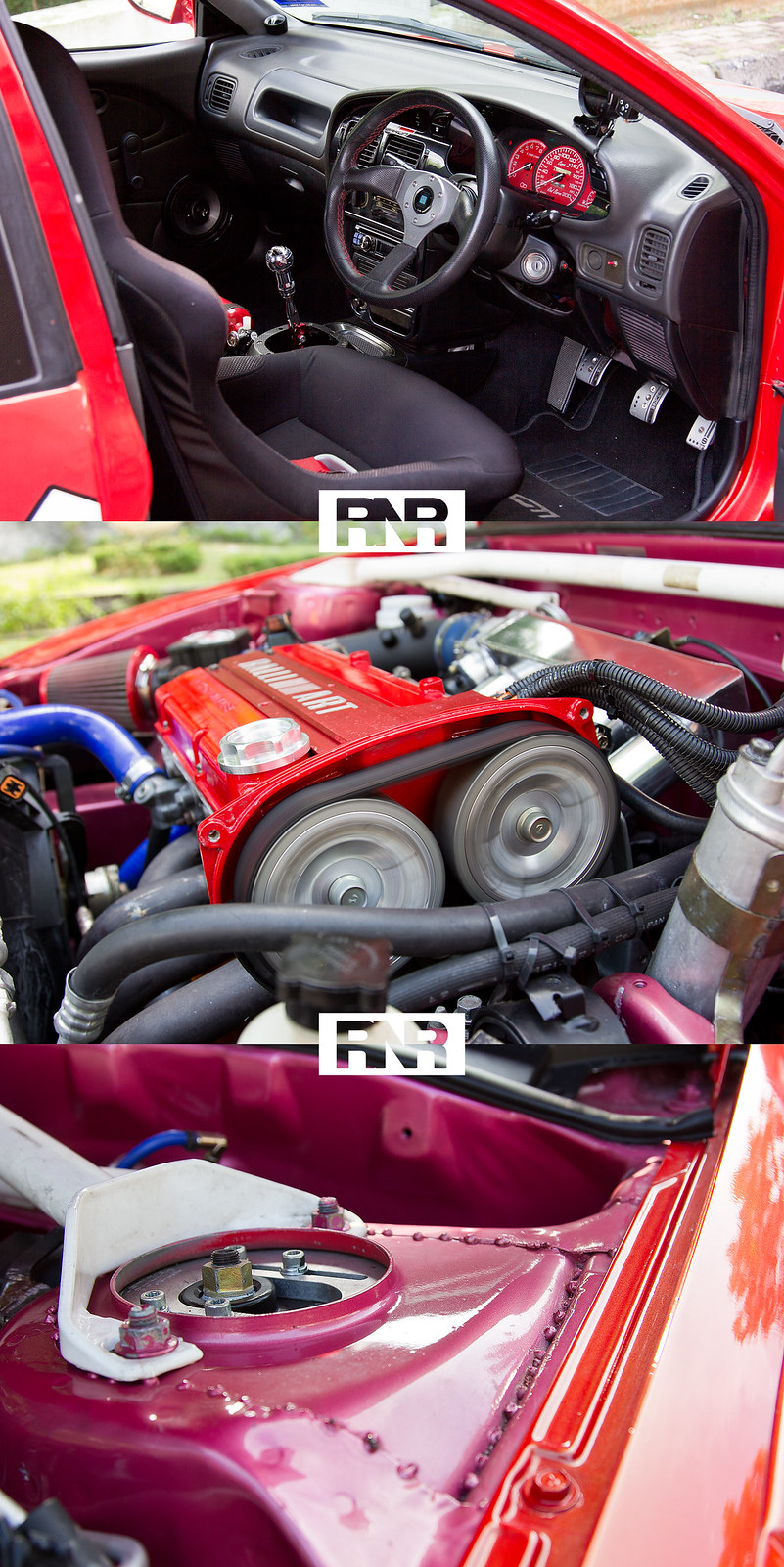 2014, Red Baron 2.0 was born out of necessity since the 1.3L engine was not going to enough to race against others for time attack races. GRA races usually involve very short twisty tracks, time attacks usually have longer, more high speed tracks. Red Baron v2 now sports a 1.8L 4G93 engine with stock bottom-end and the usual fare for the cylinder head. Interesting though, Red Baron v2 is on massive (for the car) 225/45/17 wheels which hasn't ruined the performance of the car but instead increased the handling of the now front heavy race car. 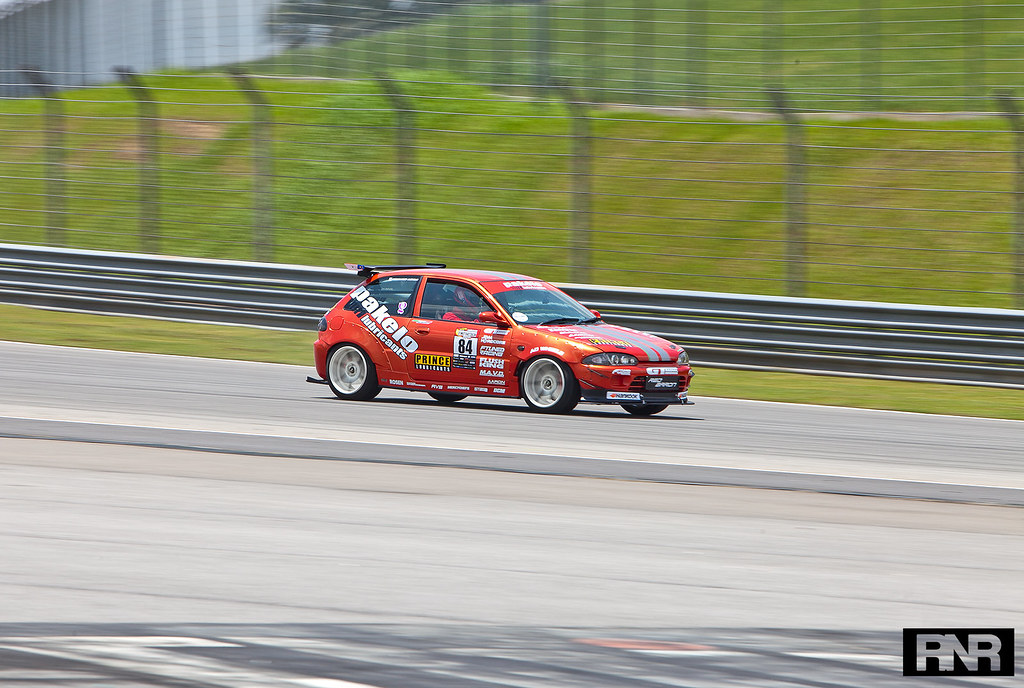 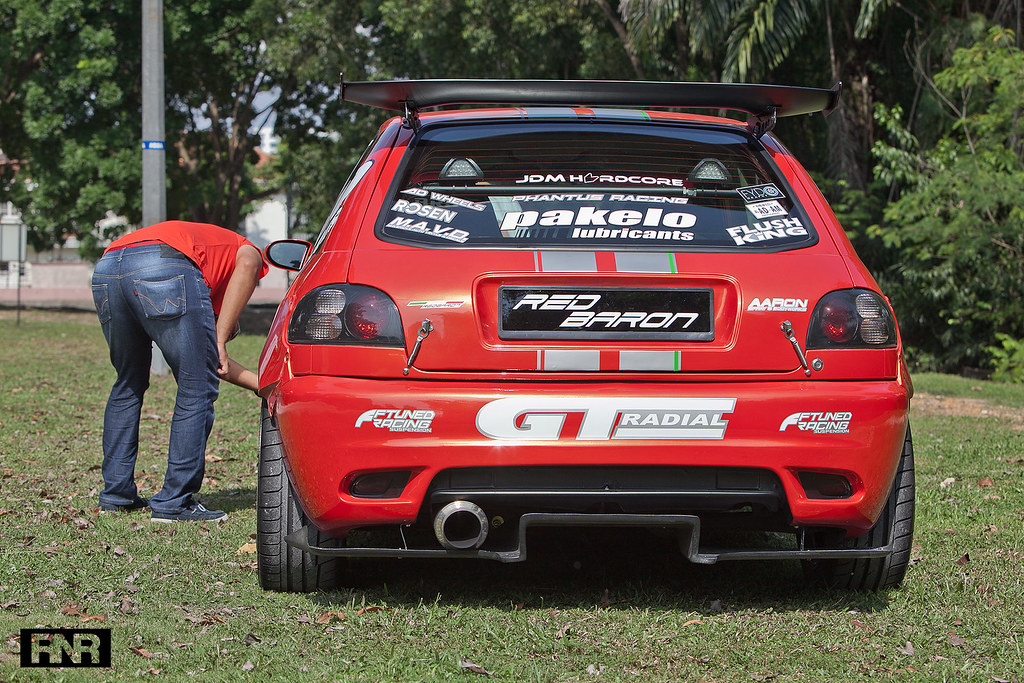 Dat ass!
I'd like to thank Azman for entertaining my request to cover his bright red 'stock' car. To close, I'd like to quote what Azman repeatedly harped on about during the whole interview : "Guys, if you're serious about motorsports then give it 110%. Don't be half assed about it. If you give it your all, you'll eventually see results and even sponsors will be easier to approach."