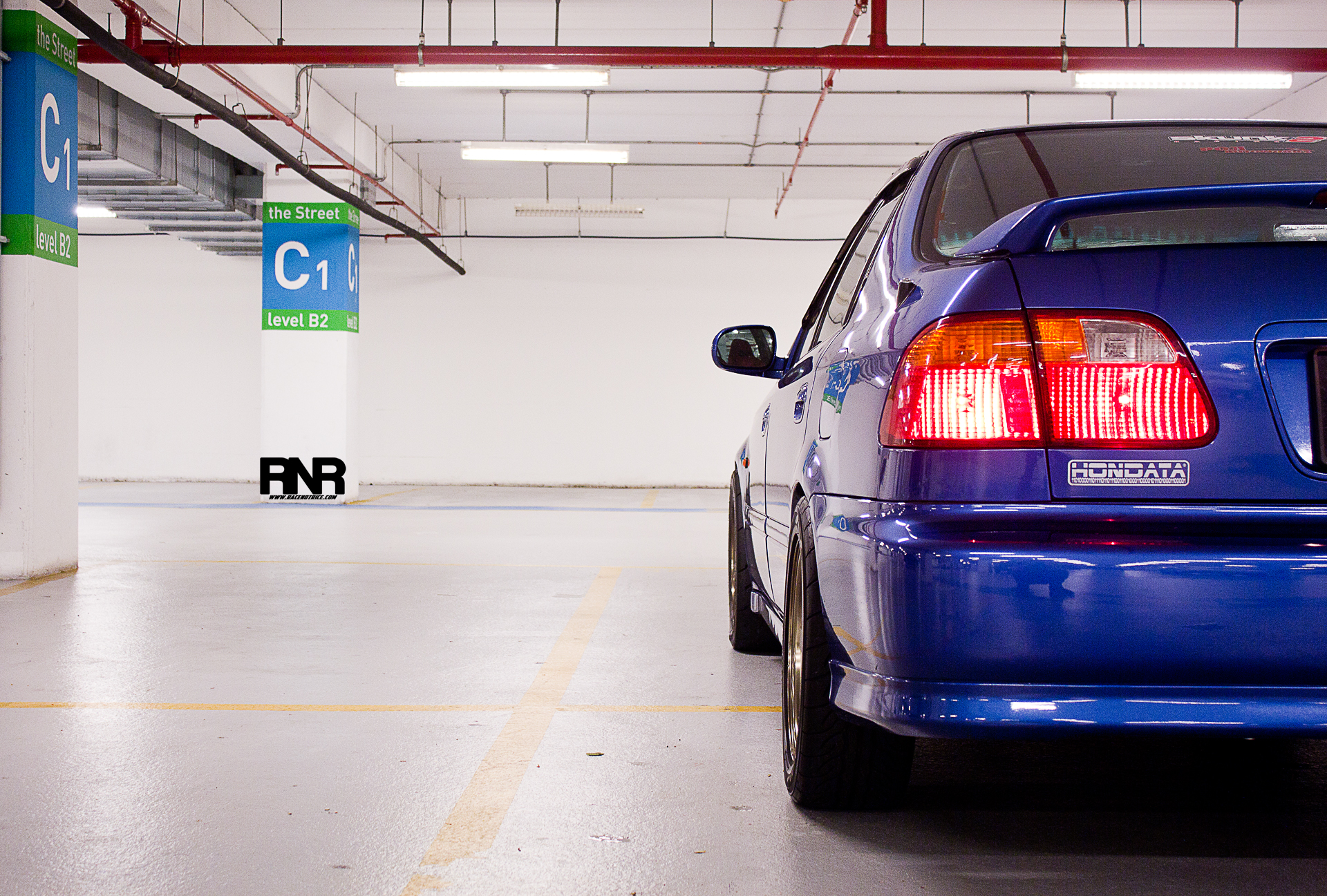 Truth be told, I know very little about Hondas. I've only experienced Hondas and experiencing them is what Hondas are all about. The high-pitch noise that drones in your ears the moment the VTEC solenoid engages, the insane response you get that can only come from a naturally aspirated engine, the ball-crushing surge of torque - as an experience, it's not something someone can forget easily. 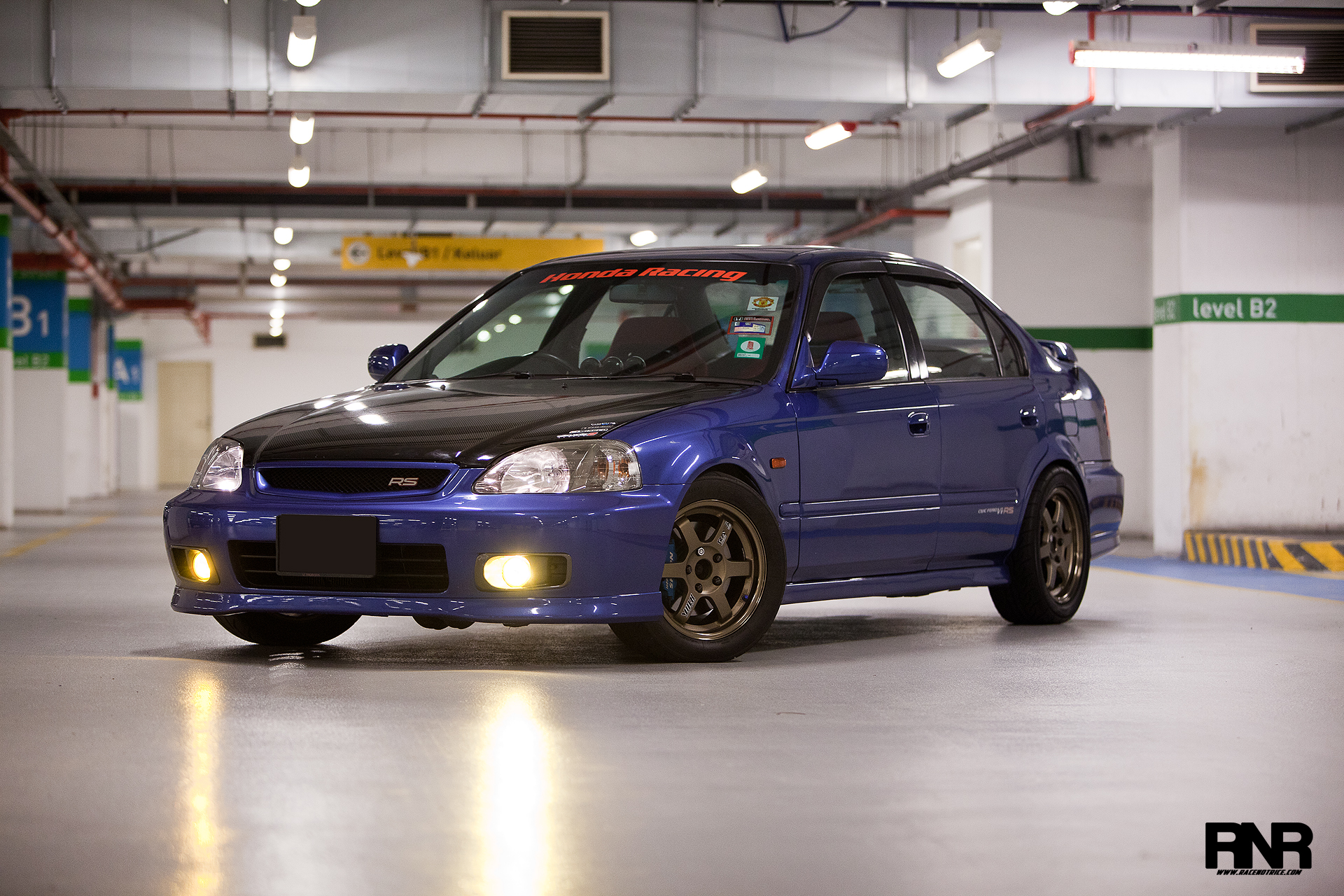 The owner of this gorgeous subaru blue Civic Ferio works in the same place as I do. It's easy to know when he's in the office, just listen for the ear piercing growl from the J's Racing exhaust followed by the distinct bells of the Ogura (super single) clutch just as he shuts off his engine. At first I didn't talk to the owner directly, I spoke with his wife instead who happened to be a colleague of mine asking about mods, cars history and what the husband has done with the car. 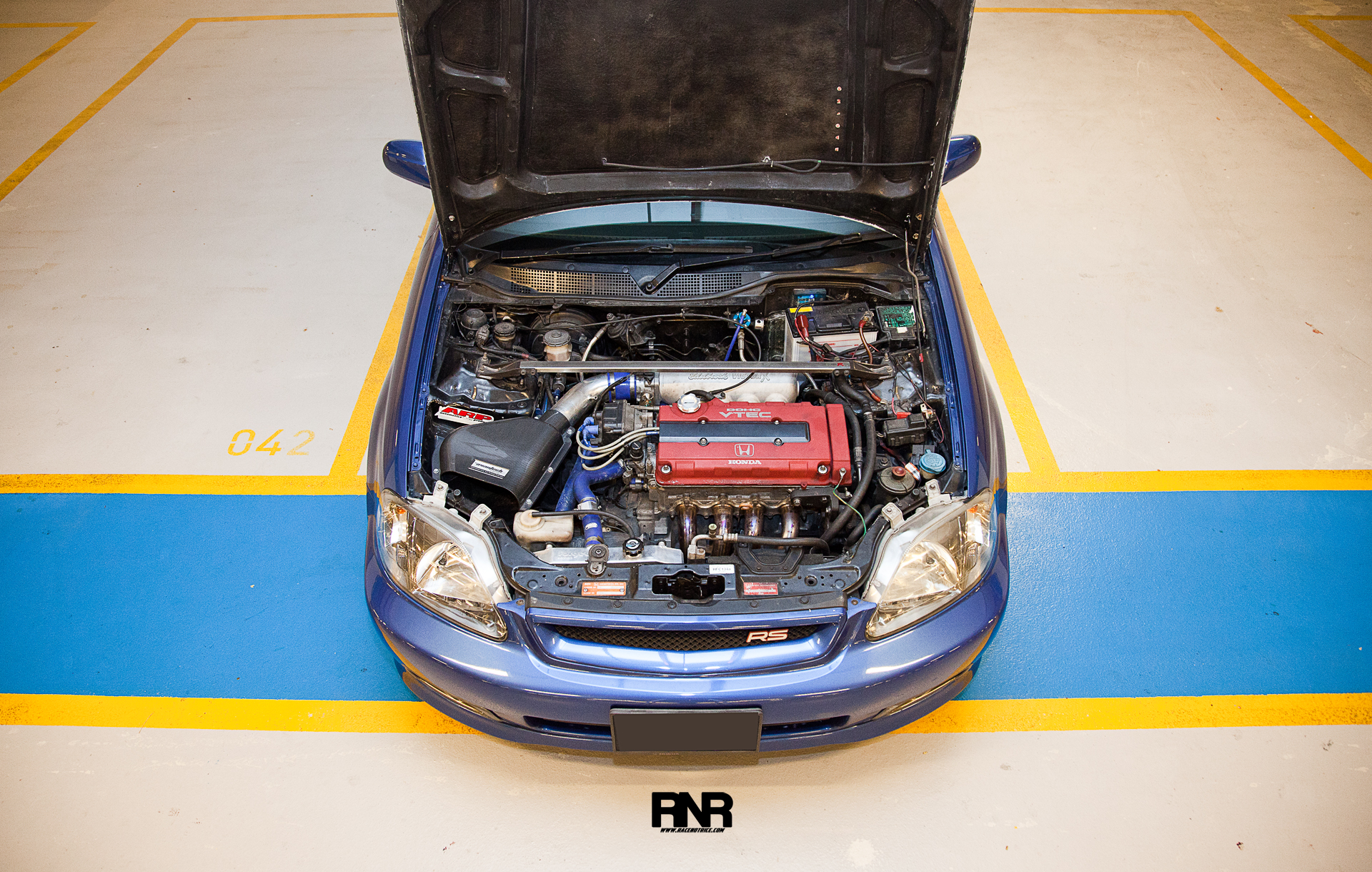 Surprisingly she answered most of what I wanted to know. B20B engine frankensteined from the Honda CRV block and the B18CR head, forged pistons and conrods, Skunk2 exhaust, Hondata, Cusco, Project U, Hardrace.... at this point everything blurred because I had zoned out. It's one thing to meet a knowledgeable female who knows her mods, it's another to meet a knowledgeable female who knows about her husbands mods and seems ok with it! She explained that that was the very car her husband had wooed her with and they had many fond memories of road trips and dates in that car so she's as fond of the car as her husband is. Everything he had done was with consent and approval from the wife! And to quote her "Does it make the Civic go faster or not?" 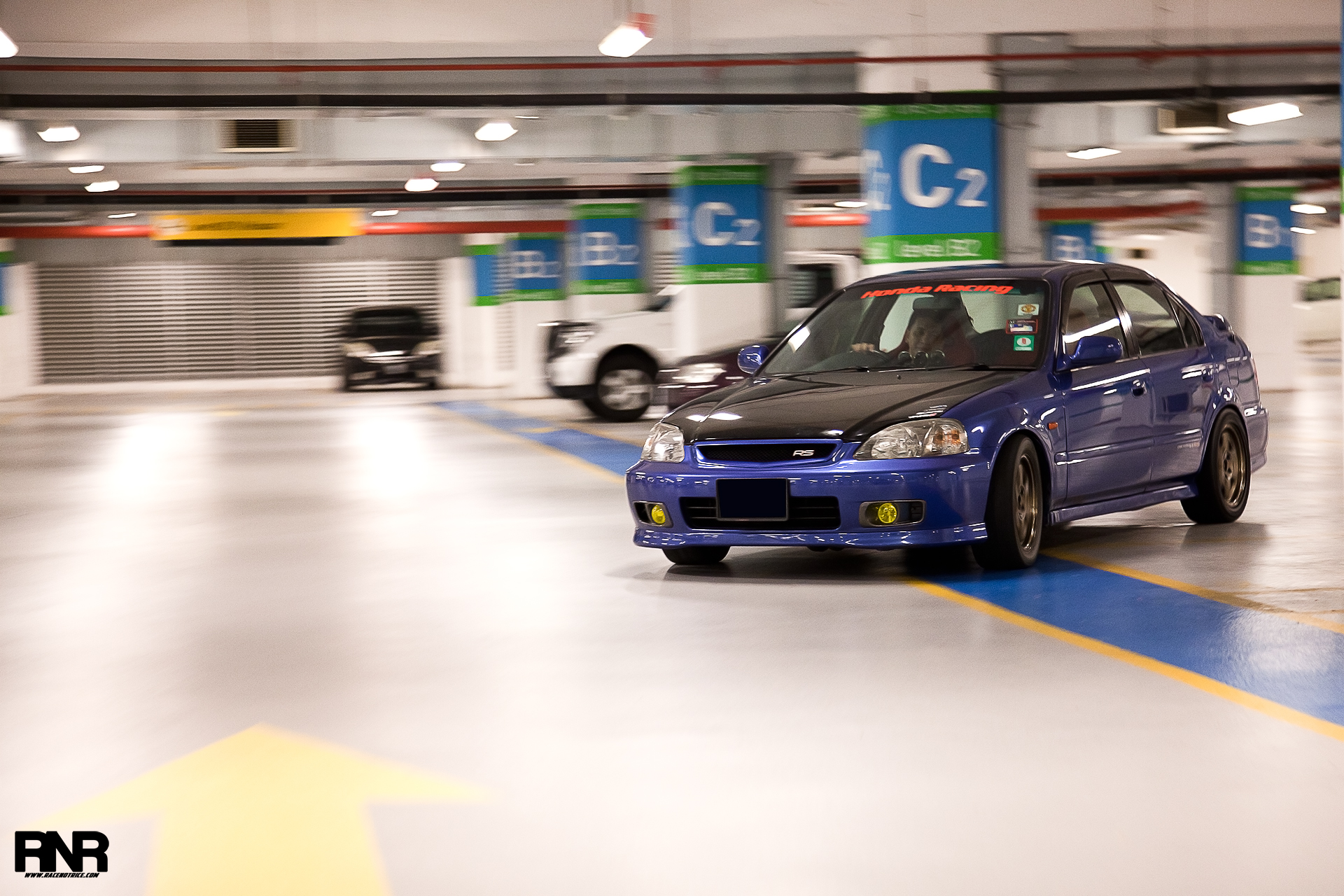 I finally got around to meeting the husband and he quite eagerly agreed to a feature and photoshoot. He explained that he's gone through a lot of different engines but stopped short of going the K-series route. "It's too common and the B20 is more user friendly anyway". True. The other factor being that the K-engines are ridiculously expensive too because of the demand for these rev happy engines. The Ogura super single clutch is pretty well known for it's efficiency in putting down the power hard and fast, at the same time it's not too difficult to control unlike 3-puck or more heavy duty clutches. This being my first ever time actually testing this clutch, the bell clanking noises was somewhat disconcerting to me. Apparently it's the one thing all Ogura users aim for - the perfect bell clinking noise right before the power is put down to the tyres. Admittedly I was disturbed by the noises but holy-batman the way it bites and pours out that torque is addictive! So much so wheel spinning the R888 front tyres wasn't very difficult! 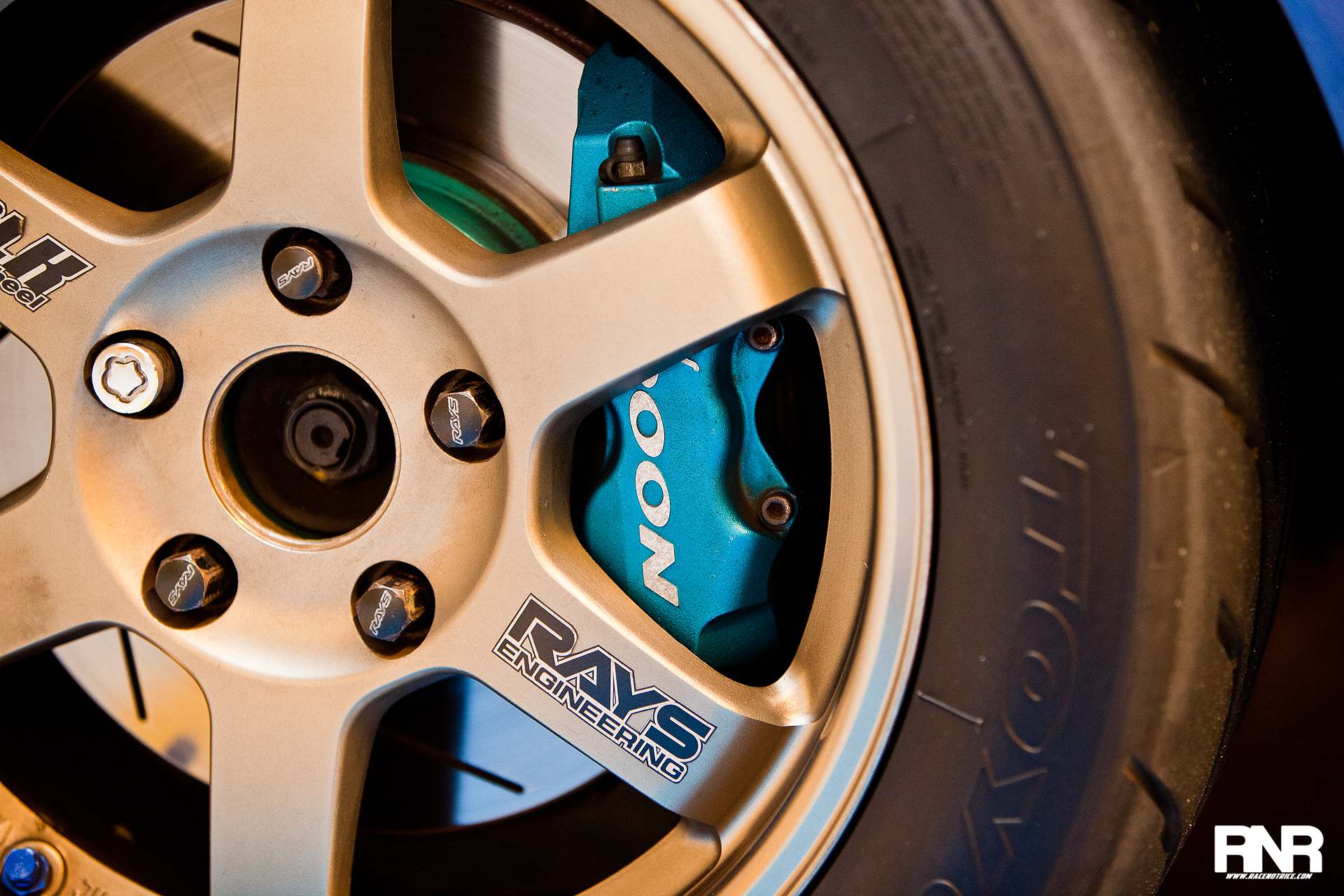 2.0L old school VTEC engine with Skunk2 Pro camshafts, valve springs and retainers make for a very rev happy engine. The owner didn't spare any expense when it came to the engine. Forged Wiseco pistons, Eagle forged conrods, ACL race bearings, Skunk2 everything, Spoon everything else, Edelbrock Victor X intake, Hondata engine management, carbon fibre Avantech cold air instake, the works! However as the old adage goes : With great power comes great responsibility. Ok that wasn't an adage but you get the general idea. Suspension from Cusco, lightweight brakes from Spoon, Hardrace lightweight alloy arms and the usual brace bars make up for all the handling requirements the car needs to run safely and very, very quickly. Interestingly Honda made the Civic Vi-RS with a plethora of handling parts. Front and rear anti-roll bars were standard, front and rear diffusers were standard, the chassis was slightly stiffer and the cars overall weight was lower than the standard Civic of that generation. But since this isn't your standard Vi-RS, all that doesn't really count. Putting down all that power to the road are Toyo R888 tyres for the front and AD08R for the rear. However there's a slight issue with torque steer - the owner says it's manageable and LSD is on the way in the near future (pending wife approval). 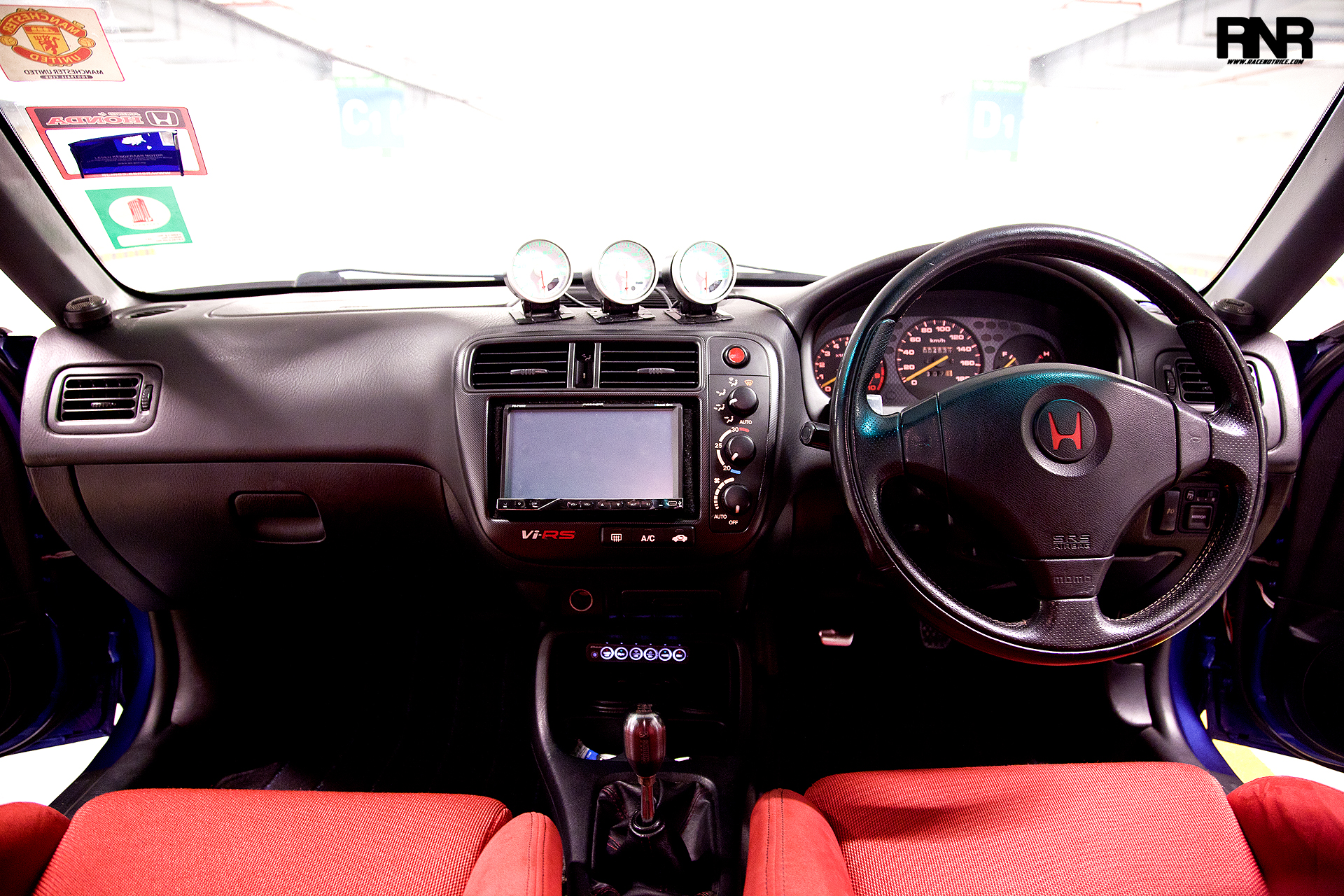 Interior was left relatively stock except for the Recaro SR3 seats and Defi meters. I personally think all cars should have relative meters to monitor and measure the cars health. The standard "Hot/Cold" temperature meter is pretty much useless unless you're not a car nut (but if you weren't a car nut why are you here in this webpage?). Oil pressure, oil temperature, water temperature, all useful things to know whenever you're driving in a car that's much more than standard. And Recaro SR3 seats are the next best thing to awesome sex! Ok no, it's not that good but SR3 rocks nonetheless! Comfortable, supportive and fat-guy (i.e.-me) friendly! 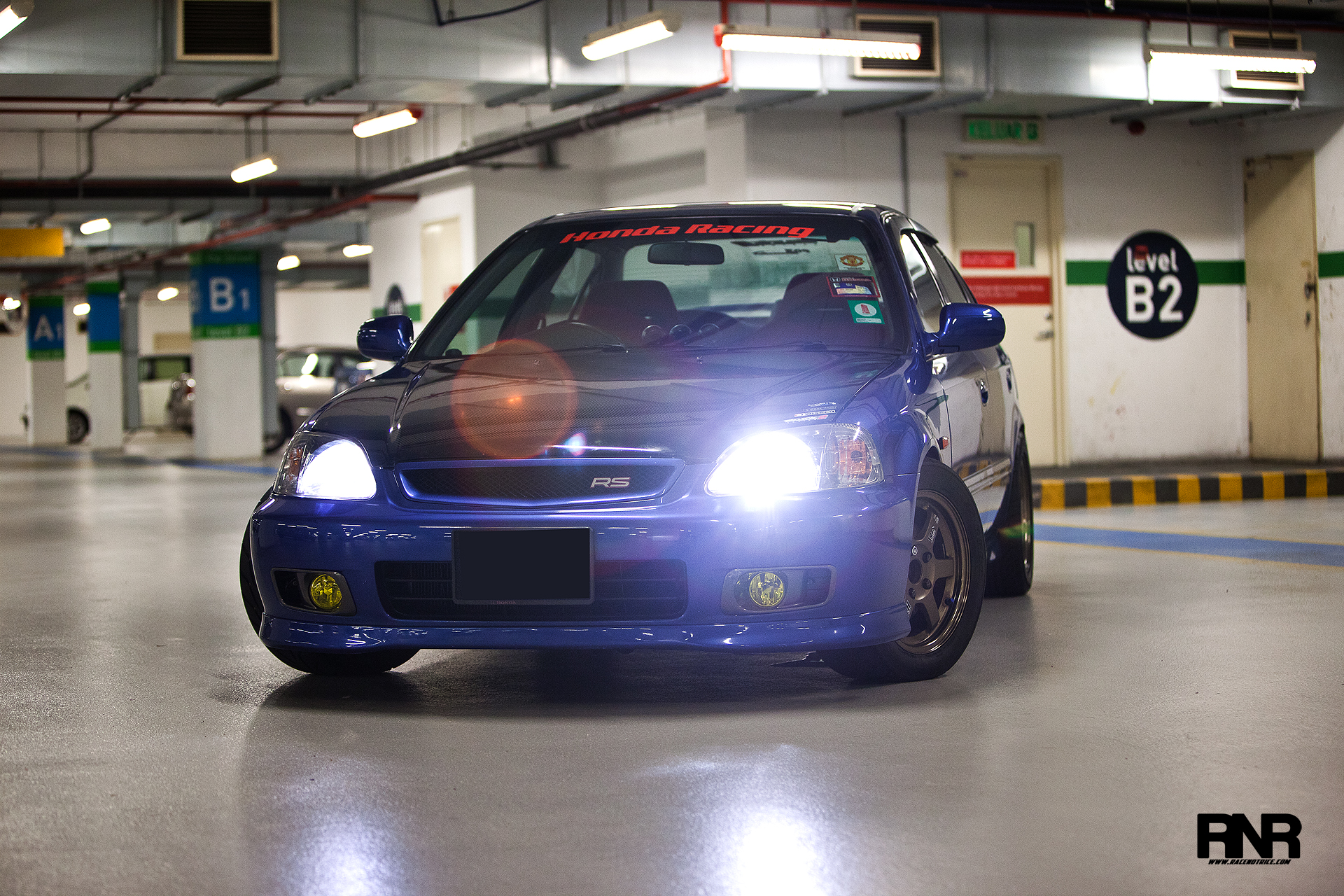 I remember a really long time ago when I sat in one of these stock Civics that belonged to a Singaporean relative. He told me to hold on, suddenly took a long sweeping curve at break-neck speeds and the Civic just took it in it's stride. He got caught by a speed camera for that stunt of his but to him it was worth it. Scaring me shitless and getting my terrified look caught on a speed camera was worth that hefty fine. This blue Civic Vi-RS could potentially do the same thing to me now if the owner tried. But I'm a lot older now and more experienced. I'd probably still look terrified but at least I wouldn't be screaming my lungs out.